As a living tradition there are few women walking around in traditional costume in the fishing village of Spakenburg. Every year their numbers drop and the characteristic 'kraplap' (apron) slowly dissappears from the street scene. As a hommage to the women of Spakenburg Heinen Delfts Blauw created a porcelain lady from Spakenburg, "you can also call her our 'ootjie' - dialect for our grandma -", says Jorrit Heinen, founder of Heinen Delfts Blauw. "She is the symbol of our family history and our connection to Spakenburg. That is where our roots are, and also the company's roots are there."

The relationship between Spakenburg and Heinen Delfts Blauw is still ging strong, something that is reflected in Jorrit's family background. "More than half of my family still lives in Spakenburg and my father is born and raised there. My grandfather was a real fisherman on the fishing boat BU7. My grandmother and my aunts would walk around town in their traditional customes, every day, with their carefully ironed aprons around their waists and their hairs pinned into a 'kuuf' - a roll of hair above the forehead. This image was very normal for me as a kid, but now it is slowly dissapearing. My desire to capture this memory led to the creation of our Spakenburgse Ootjie (grandmother). She is completely made by hand here in our workshop in The Netherlands and it takes many hours of fine painting to add all the original details to her traditional costume. It became a statue that I look at with a lot of compassion and pride."

Especially the 'kraplap' the apron of the Spakenburgse Ootjie is painted with great amount of precision and this has a reason. Basically you can say that Heinen Delfts Blauw exists today thanks to the 'kraplap'", Jorrit explains. "My dad once started painting and decoratin the aprons of the traditional costumes in his village. He did this with great passion and skill and soon everyone wanted a painted apron. He painted beautiful floral motifs, but on request also very vivid designs. Eventually someone asked him if he could also paint these designs onto a vase and that is when he started painting on porcelain. In the mid 70s my parents would pack up their car, filled it with painting equipment and vases to go to the Spakenburgse Dagen market to sell his artwork. His products were so popular that with all the requests he got in August, his calender was filled till Christmas time." Now, years later, Heinen Delfts Blauw is one of the largest producers of Delft blue earthenware worldwide, with stores and factories in Amsterdam, Delft, Putten and even Curacao and China. "And it all started with a 'kraplap'", Jorrit laughs. "Who would have thought!"

"To create and paint our Spakenburgs Ootjie is a very intensive process and the details are amazing", Jorrit explains. "My father kept a close watch to make sure we did the traditional costume justice, so you can be sure that our lady is made with the greatest care and eye for detail." Another thing that you notice straight away is that the porcelain lady has no facial features. "We have chosen not to give her a face. We want people to see the face of their own ootjie in her, their own grandmother, aunt of mother, and that way to let her be a symbol for their own family history." 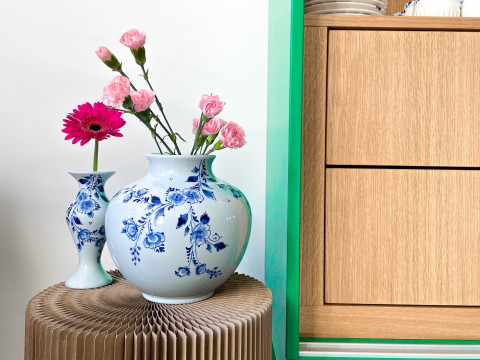 Heinen Delfts Blauw comes with a brand new Delft blue collection of handmade vases with the name: Made-Lief. Made with Love. These hand-painted vases have modern lines, elegant shapes and are decorated with a romantic Delft blue blossom. This is Delft blue in it's purest form! 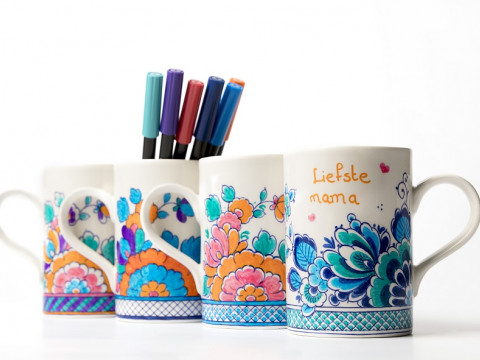 We came up with something new, the DIY kit! Make your own mug, birth tile or write something personal on an already existing Delft blue piece. With the porcelain markers of Edding and earthenware of Heinen Delfts Blauw, you feel like a real master painter. 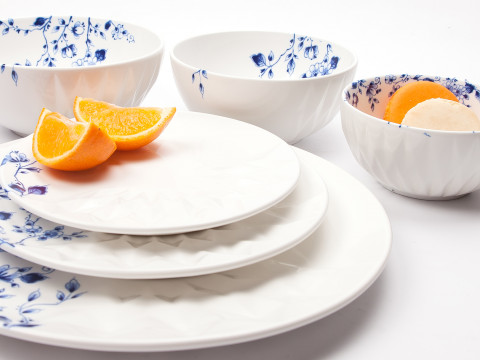 Heinen Delfts Blauw works on new traditions in close cooperation with famous Dutch designers. The result: unique pottery objects that excel in design. Special jewelry in any setting. This week it's Romy Kühne's turn. She designed a very modern set of tableware with character.